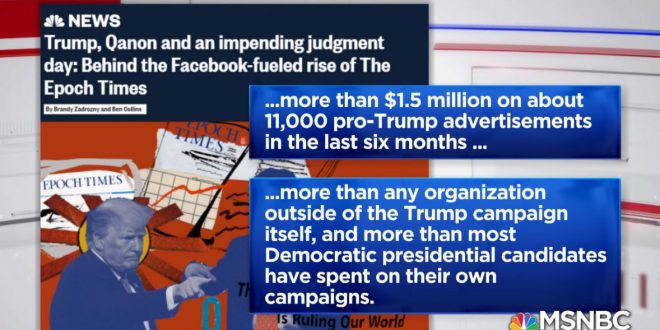 By the numbers, there is no bigger advocate of President Donald Trump on Facebook than The Epoch Times. The small New York-based nonprofit news outlet has spent more than $1.5 million on about 11,000 pro-Trump advertisements in the last six months, according to data from Facebook’s advertising archive — more than any organization outside of the Trump campaign itself, and more than most Democratic presidential candidates have spent on their own campaigns.

Those video ads — in which unidentified spokespeople thumb through a newspaper to praise Trump, peddle conspiracy theories about the “Deep State,” and criticize “fake news” media — strike a familiar tone in the online conservative news ecosystem. The Epoch Times looks like many of the conservative outlets that have gained followings in recent years. But it isn’t. Behind the scenes, the media outlet’s ownership and operation is closely tied to Falun Gong, a Chinese spiritual community with the stated goal of taking down China’s government.

Hit the link for much more. New Yorkers will be painfully familiar with the Falun Gong, who regularly stage bizarre and gory demonstrations in midtown.

Watch the first clip for a description of Falun Gong’s goal of bringing about the end of the world. Literally.