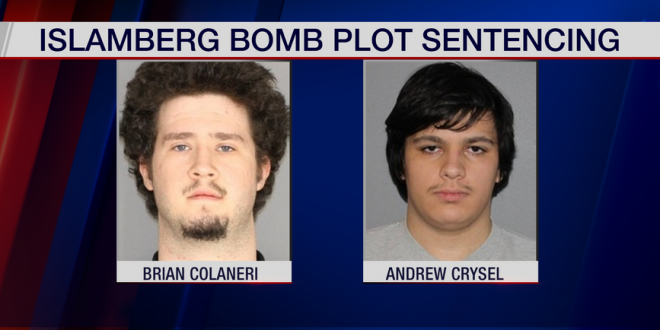 Two of four young men arrested for plotting to attack an upstate New York Muslim community with homemade explosives were sentenced Friday to four to 12 years in prison. Brian Colaneri, 20, and Andrew Crysel, 19, pleaded guilty to terrorism conspiracy in June.

They and two others from the Rochester area were accused of planning to attack Islamberg, near Binghamton. Police have said they had access to 23 rifles and shotguns and three homemade explosives when they were arrested in January.

Islamberg is a rural Delaware County community of about 200 residents that has been targeted with accusations, many spread on right-wing websites, of being a terrorist enclave. In 2017, a Tennessee man was convicted of federal charges for what authorities called plans to burn down Islamberg’s mosque.