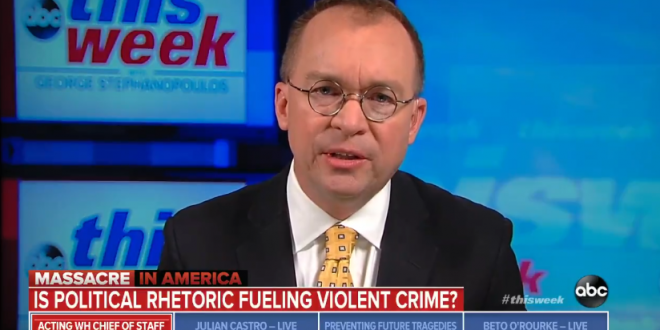 Acting White House Chief of Staff Mick Mulvaney defended President Donald Trump on Sunday, saying mass shootings have been an issue for decades and he doesn’t “think it’s fair to try and lay this at the feet of the president.”

After ABC’s Chief White House correspondent Jonathan Karl listed off the latest string of shootings since Trump’s inauguration, Mulvaney responded on “This Week” by saying it is a problem that has “happened for many decades.”

“You make an excellent point there which is this cancer, this difficulty that we face as a nation, predates this administration by many, many years,” Mulvaney said. “What can you do? You have to try and fix the society, right? You have to figure out why people now take it upon themselves to take guns into large groups of people.”

Mick Mulvaney said multiple times in @jonkarl interview that Trump is angry and upset by El Paso shooting. But Americans haven’t seen the president since Friday. He’s been at his golf club.

Mulvaney: “I blame the people who pulled the trigger” pic.twitter.com/QTn86a7vah

ABC: Why has Trump downplayed threat of white nationalism?

MULVANEY: I don’t think he has

ABC: Trump literally said “I don’t really” when asked if he sees it as a rising threat 5 months ago!

“There’s no benefit here to try to make this a political issue. This is a social issue and we need to address it as that,” acting White House chief of staff Mick Mulvaney tells @jonkarl when asked if President Trump’s divisive rhetoric is dangerous https://t.co/Cw6CaMPTKg pic.twitter.com/bEoDJjwezl

On ABC, acting WH chief of staff Mick Mulvaney references the alleged El Paso shooter’s manifesto. He notes the shooter says he’s felt this way a long time before Trump became president. Mulvaney also disputes that Trump has played down white nationalism in the past.

Previous Dayton Shooter Identified As 24 Year-Old White Male
Next Tim Ryan: The GOP Needs To “Get Their Shit Together” And Stop Pandering To The NRA, People Are Dying