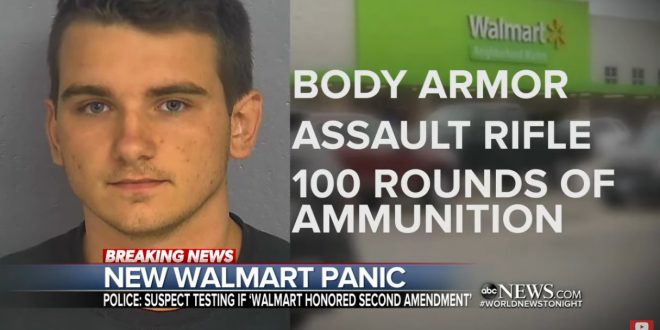 Dmitriy Andreychenko walked into a Walmart in Missouri equipped with body armor, a handgun and a rifle less than a week after a gunman killed 22 people in a Walmart in Texas. He says it was a “social experiment” — and not intended to cause panic. “I wanted to know if that Walmart honored the 2nd amendment,” he told Springfield police, according to a probable cause statement. Andreychenko, 20, recorded himself as he pushed a cart into the store in Springfield, saying he intended to buy grocery bags.

He faces a charge of making a terrorist threat in the second degree, the police department said on Twitter. The consequences he faces are not a reflection of how Missouri — an open carry state — respects the 2nd Amendment, prosecuting attorney Dan Patterson said in a statement. “Missouri protects the right to open carry a firearm, but that right does not allow an individual to act in a reckless and criminal manner, endangering other citizens,” Patterson said.