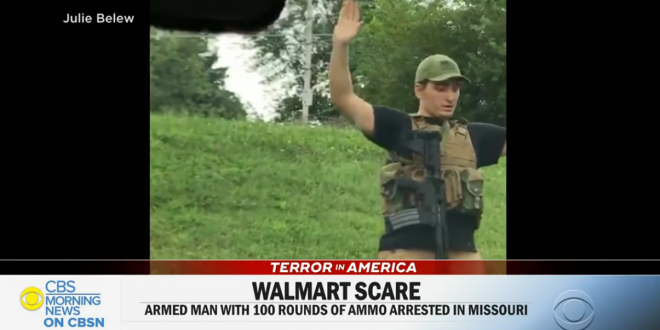 The armed man who walked into a Missouri Walmart store dressed in body armor and fatigues is “lucky to be alive” after being confronted at gunpoint by an off-duty firefighter, a police official said.

No shots were fired in the incident that happened just after 4 p.m. Thursday in Springfield, Missouri, a city of around 160,000 in the southwestern part of the state, officials said. Police were called about a possible active shooter, and the store manager pulled a fire alarm and told people to evacuate, Springfield police Lt. Mike Lucas said.

“He walked in here, heavily armed with body armor on, in military fatigues, and caused a great amount of panic inside the store,” Lucas said

I was just at Walmart in Springfield, MO & a dude walked in w/body armor on & an assault rifle. Oh my god I'm shaking. The owner pulled the fire alarm told us all to run & pulled a gun on the guy. police arrived 2 mins later. Wtf wtf I never want to leave my house again 😢😢😢

MORE: @kytv says the man walked into the Walmart: Neighborhood Market wearing armor and fatigues & grabbed a cart. Police say he was recording himself walking through the store on a cell phone. The store manager pulled a fire alarm, urging people to escape https://t.co/JJsd4eOjgi

Previous CHATTER AWAY: Overnight Open Thread
Next Grinning Trump Gives Thumbs Up In Photo With Baby Whose Parents Were Murdered In El Paso Terror Attack