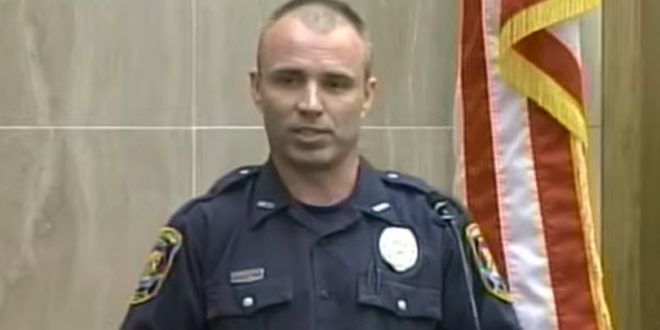 A Muskegon police officer has been placed on administrative leave while the city investigates an allegation that his home contains racist memorabilia.

City Manager Frank Peterson said officer Charles Anderson, who is white, is on leave indefinitely pending the investigation. The memorabilia was discovered by an African-American Muskegon man who toured Anderson’s house, which is for sale.

The Muskegon man, Rob Mathis, posted on Facebook that he and his wife saw Confederate flags in the house and garage, and a framed “Application for citizenship” to the Ku Klux Klan on a wall in a bedroom. Mathis posted a picture of the framed KKK document on Facebook.

Mathis and his wife, Reyna, had been ready to make an offer on the five-bedroom home they viewed on Wednesday in Holton, Mich., a small township of less than 3,000 people in Muskegon County.

They thought the house on the 22-acre wooded lot about an hour outside of Grand Rapids, Mich., would give them enough space to entertain their children and grandchildren. Then, Mathis walked into the NASCAR-decorated garage to see not one but two Confederate flags in what his wife would tell him was the home of a police officer.

When the family and their real estate agent went upstairs to check out one of the bedrooms, Mathis and his son noticed a lone wooden plaque holding an aged, yellowed document. Once the father and son got closer, they were disgusted to realize what they were looking at: an application to the Ku Klux Klan.

“The memorabilia was discovered by an African-American Muskegon man who toured Anderson’s house, which is for sale…

“I just felt so gross after being in that house, like I needed to be dipped in hand sanitizer.”https://t.co/yuydsQ6IlE