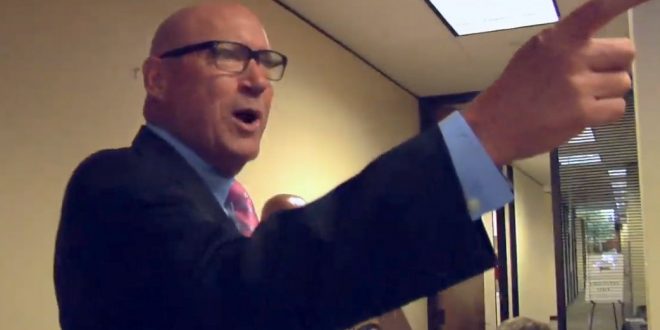 A right-wing candidate for governor in Louisiana said the “n-word” on a local radio show on Wednesday.

Gary Landrieu, a cousin of former New Orleans Mayor Mitch Landrieu, is running as an independent candidate for governor of Louisiana and has largely built his campaign around a right-wing platform of targeting undocumented immigrants in the state in order to force them to “go back to where they’re from” and of ensuring that Confederate statues in the state are protected.

In 2012, Landrieu made headlines when he was arrested after police said he dragged a woman he was in a relationship with by her ponytail from his car. On Wednesday’s broadcast of “The Right Chicks” on New Orleans’ WGSO 990, Landrieu was the subject of an apparent prank call in which the caller blasted Landrieu as “a piece of shit.”

As you’ll see in the clip below, Landrieu responds to the taunting by saying he grew up in a family of ten and therefore has “no feelings left” to hurt.

He then threatens to slap the caller in the mouth, adding, “Let me tell you, when I was a kid we learned about protecting ourselves and defending ourselves because we were called a lot of ugly names as children. As an eight-year-old, they called me, ‘Oh, there’s the [n-word] lovers right there.”

Twitter has had a few things to say about him ever since he launched his campaign.

Independent candidate for governor Gary Landrieu says he’s going to sue the secretary of state’s office because he was not allowed to list his name as Gary “Go Gary” Landrieu on the ballot. #lalege #lagov

Gary Landrieu, a cousin of Mitch and Mary, says he has a lot of famous relatives going all the way back to France. Says he’ll stop so many property tax breaks for industry. #lagov

Gary Landrieu has a big biz to match his big 1-10 billboard #lagov pic.twitter.com/COdayVUmKi

And where he from??? Why he worried about our statues?

Previous Corn Farmers: Trump Has “Slapped Us In The Face”
Next Alabama Church Riles Cultists With Anti-Trump Sign