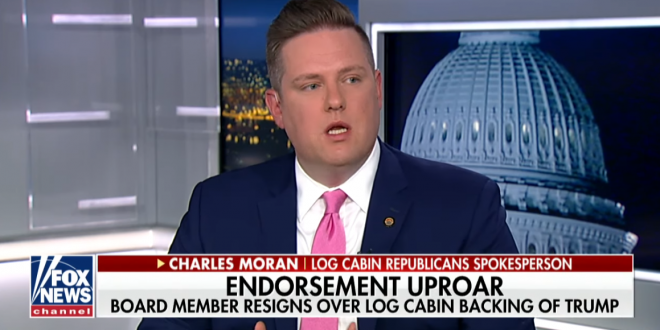 Log Cabin Spox: I Ask If The LGBT Community Is Better Off Now Under Trump And The Answer Is Yes [VIDEO]

“And under President Trump, the answer is inarguably, yes. President Trump is the first person elected president of the United States who supported gay marriage and also has a background supporting equality issues both as a businessman and as a philanthropist.

“We always try to follow the rule of trust but verify. And looking at President Trump’s appointments, appointing people in our organization, taking meetings with our organization, and just really advancing the big causes that are important to the LGBTQ community.” – Log Cabin spox Charles Moran, speaking on Fox News.

Previous Resigned Log Cabin Official: Trump Will “Divide And Destroy This Country” To Advance His Political Power
Next Half Of Trump Voters Would Blame Him For Recession