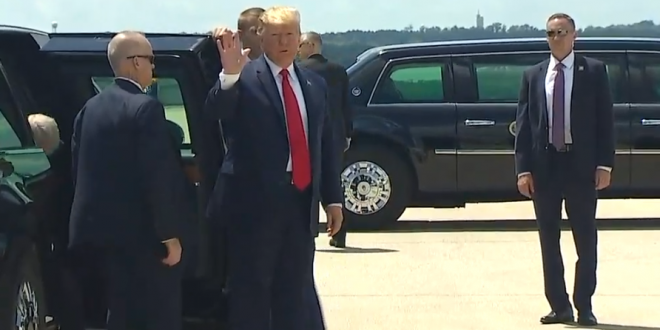 President Donald Trump and first lady Melania Trump visited victims today from Sunday’s mass shooting in the Oregon District. “You had God watching. I want you to know we’re with you all the way,” Trump said to one of the victims, according to Press Secretary Stephanie Graham.

Media was not allowed to be with the president and first lady as they visited victims. “We will be meeting with first responders, law enforcement and some of the victims,” President Trump said Wednesday.

When asked about comments Dayton Mayor Nan Whaley and political leaders in Texas made about his “rhetoric” on guns, the president said “they are trying to make political points.” Trump spoke to Whaley as he got off of Air Force One at the base. The mayor and Sen. Sherrod Brown plan to talk about the visit later today.

Trump is due to arrive in El Paso around 3pm EDT.