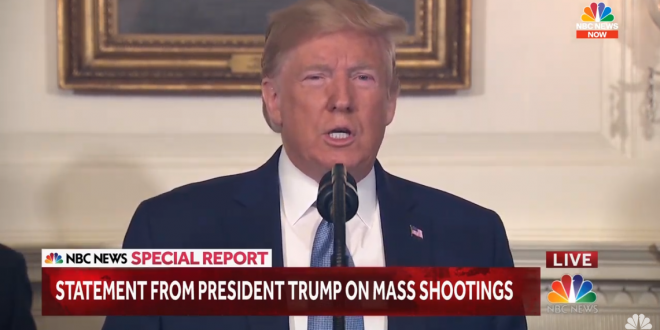 Ahead of his planned remarks Monday in the wake of this past weekend’s shootings, President Donald Trump has proposed “strong background checks,” perhaps, he said, tied to immigration reform. In tweets Monday morning, the president said, “We cannot let those killed in El Paso, Texas, and Dayton, Ohio, die in vain.” Trump has threatened to veto two background check bills passed by the Democratic-controlled House of Representatives and Senate Majority Leader Mitch McConnell has refused to consider them.

We cannot let those killed in El Paso, Texas, and Dayton, Ohio, die in vain. Likewise for those so seriously wounded. We can never forget them, and those many who came before them. Republicans and Democrats must come together and get strong background checks, perhaps marrying….

….this legislation with desperately needed immigration reform. We must have something good, if not GREAT, come out of these two tragic events!

Previous Red-Caped Catholic Loons Vs “Demonic” Walmart
Next Trump Blames Shootings On Video Games And Internet, Makes No Mention of Guns, Gets Name Of City Wrong