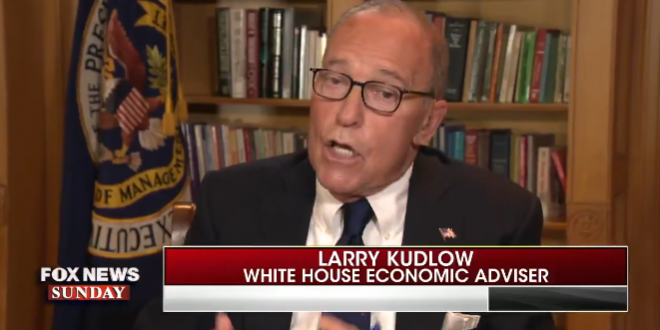 White House economic adviser Larry Kudlow on Sunday sought to allay fears of an economic downturn, saying “I don’t see a recession at all.”

“The Trump pro-growth program, which I believe has been succeeding, we’re going to stay with that,” Kudlow told Perino. “There’s no recession on the horizon,” he added. “What’s wrong with a little optimism?”

Greenland has said it’s not for sale and the president is being widely mocked for the idea. Kudlow chuckled a bit and said, “It’s developing. We’re looking at it, we don’t know.”

“Denmark owns Greenland. Denmark is an ally. Greenland is a strategic place up there. They’ve got a lot of valuable minerals,” he continued.

“I don’t want to predict an outcome, I’m just saying the president, who knows a thing or two about buying real estate, wants to take a look.”

During the Bush II administration, Kudlow also denied fears of the downturn that ultimately became known as the Great Recession.