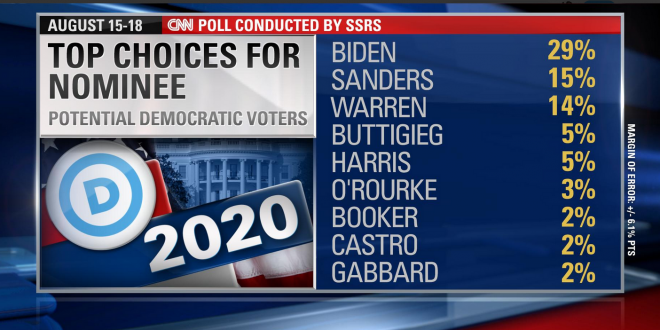 Joe Biden has expanded his edge over the Democratic field in a new CNN poll conducted by SSRS, with 29% of Democratic and Democratic-leaning registered voters saying they back the former vice president. That’s up 7 points compared with a late June CNN survey. No other candidate has made meaningful gains over that time.

The shift returns Biden to a double-digit lead over his nearest competitors, Vermont Sen. Bernie Sanders at 15% and Massachusetts Sen. Elizabeth Warren at 14%. Their support is largely unchanged since earlier this summer.

Biden’s advantage in the poll is boosted by stronger support from self-identified Democrats (31%) than from independents (23%), older voters (34% among those age 45 and older) than younger ones (23% among those under age 45) and from moderate and conservative voters (34%) than liberals (22%).

Previous CHATTER AWAY: Overnight Open Thread
Next Trump Promises Not To Build Hotel In Greenland