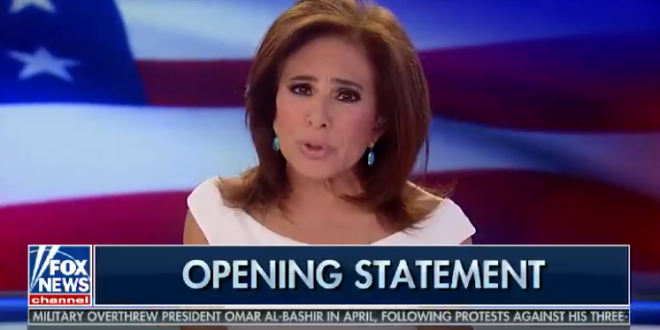 Jeanine Pirro Suggests Epstein Was Murdered: How Do You Determine Manner Of Death With No Cameras?

“This medical examiner took extra time from Saturday to Friday to put the facts together to determine the manner of death. How do you determine the manner of death when there are no cameras, no cellmates, guard are sleeping, some of them are even refusing to cooperate. Did that medical examiner have a total picture? After six days they take him off suicide watch so he apparently — was miraculously taken out of depression and is placed in his cell with no cellmate, no cameras. You have make-believe correction guards, most of them are sleeping.

“The only way to break this case is to bring those in power to their knees before the federal government. Bill Barr must monitor this case very closely. We already know Epstein was able to walk because of a U.S. Attorney who at best was more interested in his career than doing justice, and at worst was bought and a pawn of high-powered defense attorneys. Mr. Barr, the American people await your decision. That decision, Mr. Barr, will impact more than just the Epstein case. It will impact our faith in the American system of justice.” – Jeanine Pirro, last night.

I’ve seen the criminal justice system buckle to power and money before…money buys freedom, ridiculous plea deals that make no sense…There is nothing that makes me angrier than when the fix is in. And the fix was in in the Jeffrey Epstein case. #OpeningStatement pic.twitter.com/RtvqF6UNwS