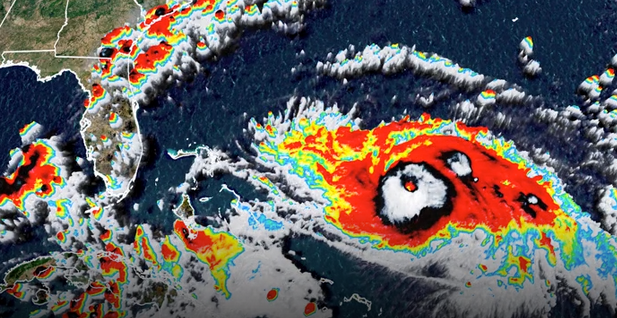 Hurricane Dorian continues to strengthen in the Atlantic Ocean, with winds increasing up to 115 mph, making Dorian a Category 3 hurricane on the Saffir-Simpson scale. Hurricanes that are Category 3 or higher are considered major hurricanes. Dorian is located 625 miles east of West Palm Beach Florida and moving northwest at 10 mph.

Dorian is forecast to make landfall as a Category 4 storm on Monday, with sustained winds of around 130 mph. If that forecast holds, it will be the strongest hurricane to strike Florida’s East Coast since Andrew in 1992, according to CNN Meteorologist Brandon Miller.

Hurricane Andrew — which formed on Aug. 16 1992, and lasted until Aug. 28 — was originally believed to be a Category 4 storm, but was reclassified in 2005 as a Category 5. Its path included northwestern Bahamas, Florida and Louisiana, and it caused between $25 and $27 billion in damage.

2pm Dorian update; Dorian is now a category 3 major hurricane. Winds 115mph. A subtle track shift slightly east after landfall, but as big as Dorian will be, that doesn’t change the impacts to Central Florida. We’d need a much harder right turn. pic.twitter.com/mtCg7MFs2S

Long lines at this North Palm Beach gas station. We just met a dad who called #Dorian preparations on the east coast “pandemonium”. Another man called it “controlled chaos”. We’ll be live on the east coast as they get ready for #HurricaneDorian @winknews pic.twitter.com/wLtzjkJPlq

. @Publix in the Southgate shopping center received a shipment of water this morning, but shelves remain empty. Shipments are quickly selling after being stocked, according to an employee. Supplies of toilet paper, batteries, and non-perishables are still available. #Dorian pic.twitter.com/8aDJnpMfwY

Store shelves are bare ahead of Dorian’s arrival. pic.twitter.com/3xLeiH1HR0