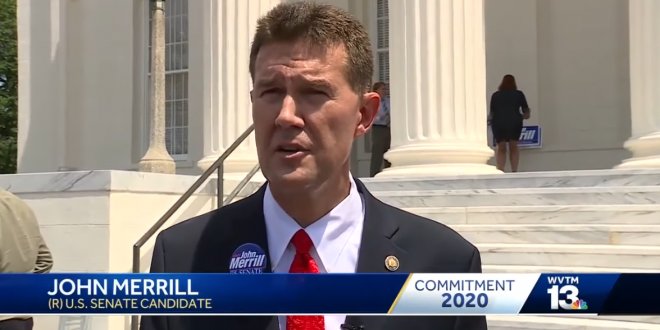 GOP Senate Candidate: The Blame For Mass Shootings Belongs “At The Feet Of Those Who Create The News”

“For the radical Democrats and the liberal media to blame Donald Trump for these massacres is wrong. Unfortunately, that has become all too common for the media elite – they place blame on our conservative institutions, our churches, and our culture.

“The blame for what happened in Texas and Ohio this past week is not at Donald Trump’s feet but at the feet of those who create the news – they are looking for an easy scapegoat instead of confronting the real problem.

“We do not have a gun control problem, we have a spiritual deficit problem, and by making this a matter of faith, we can confront evil head-on.” – Alabama Sec. of State and US Senate candidate John Merrill, in an op-ed published by right wing outlets.

Merrill first appeared on JMG when he blamed “homosexual activities” for ruining television, which used to have excellent shows like Gunsmoke.

Previous NYPD Union Boss Under Fire For Sending Racist Video
Next Man Pleads Not Guilty In Anthem Attack On Child, Claims Brain Injury Made Him Think Trump Ordered It