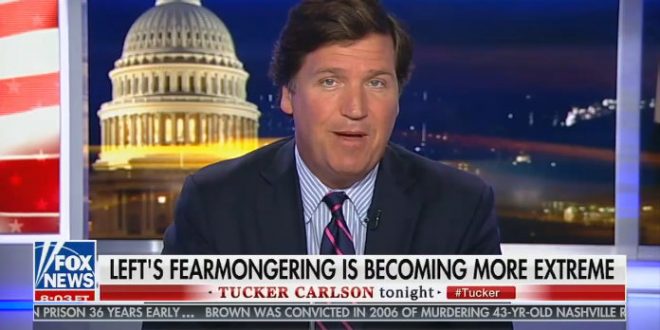 Fox’s Tucker Carlson: Calling Out White Supremacy Is A “Leftist Diversion” That Will Lead America To Civil War

“Ever notice that it is the highest-paid people on television who are the most determined to convince you that white supremacy is America’s biggest problem? Why is that? Simple. Every minute you’re angry about race is a minute you’re not thinking about class, which of course is the real divide in this country.

“Working class people of all colors have a lot more in common, infinitely more in common with each other than they do with some overpaid MSNBC anchor. And if you’re allowed to think about that for long enough, you might start to get unauthorized ideas about economics, and that would be disruptive to a very lucrative status quo.

“So, they whip you into a frenzy of racial fear so that it never enters your mind. It’s a diversion. Everyone else hates each other, they get to keep their money. Pretty tricky. Unfortunately, it’s also destroying the country. This is the path to civil war, obviously.” – Tucker Carlson, last night.

Tucker Carlson Rails Against The Left’s ‘Frenzy of Racial Hatred’: ‘This is the Path to Civil War’ https://t.co/mvDgXgJqxy