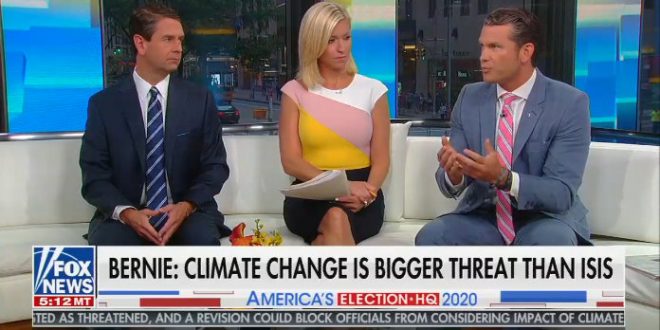 Fox Host: The Left Wants To Fight The Weather [VIDEO]

“The left says it all the time. This is what they believe. It is their religion. They want to fight the weather. The rest of us want to deal with real threats that want to take away our freedoms. And — think about four years ago. What was that, 2015? ISIS was still, you know, this was during Obama’s term. “ISIS was still a huge problem. The caliphate was there. President Trump ran on destroying ISIS, which he did to their physical caliphate.

“Now there’s remnants that we need to be concerned about today. That’s taking on a real threat directly. Whether it’s hot or cold, the enemy is here, as far as liberals are concerned. And it’s all about control for them. That’s why climate change is the perfect enemy. They get to control your life to deal with it no matter what’s happening.

“By the way, it’s what they’re learning in college across the board. They’re not learning about radical Islam. They’re learning about environmentalism and radical environmentalism and they’re being told it’s the most important thing. All those kids going to schools, public and private. That’s why these messages catch on. It’s because young kids voting believe it. – Fox & Friends host Pete Hegseth, on this morning’s show.

Pete Hegseth goes on a rant about The Left trying to “fight the weather” as a means to “control your life,” and that college kids are “not learning about radical Islam, they’re learning about environmentalism.” pic.twitter.com/Y6jKCu7zTd