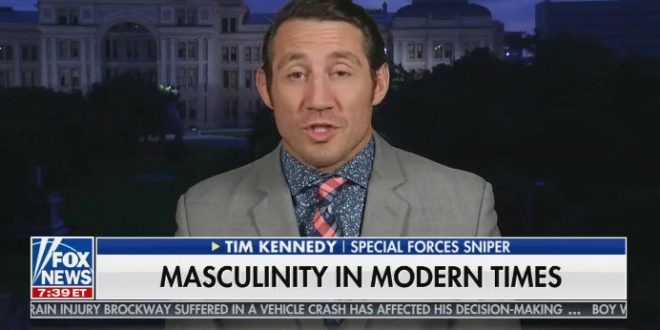 “People are saying there’s a toxic masculinity problem, when in fact there’s not enough masculinity. What we’re doing to boys right now is we are stunting them. We are hard-wired to do incredible things, to be protectors. Everybody is made different but men have to be men. And boys have to be boys. When you give them ADHD medications, when you tell them they can’t go climb a tree, that they can’t be busy in a classroom, these are the results. You have to let boys be boys.

“That’s a great thing. That got us to the moon. That defeated the communists. That stopped the fascists and the real Nazis in Normandy. Those weren’t little boys and girls that were storming beaches, those were men. Real men. I loved an era where if you called a president a racist, a bigot, a coward, you would be at the end of a duel.” – Former UFC fighter and Army sniper Tim Kennedy, this morning on Fox & Friends.

In a time where masculinity has been demonized. When identifying toxic masculinity is more celebrated than a man’s achievements. What we are seeing is the most vile form of that rage being realized. Masculinity is about being a protector. Masculinity is about integrity. It is hardwired into every single man’s soul. We all have a choice to fight. We are all warriors on the inside. But if that is suppressed, if that is denied, it manifests in the most unhealthy ways. We have to a have purpose and let that purpose be fulfilled. We have to stop telling our young men to be anything else but a man. Strength is good. A fierce passion to protect the helpless is good. An insuppressible desire to explore and discover should be encouraged. Danger should be sought out and success should be rewarded. No medals for participation. But elation with every accomplishment. Let’s celebrate what it means to be a man. We stormed the beaches of Normandy to stop the Nazis. Placed the American flag on Iwo Jima and built the Chrysler building in New York City. Let’s remember what it means to be a man and most of all let us show this next generation what it looks like to be a man. Let them see you fail. Let them see you sweat. Let them see blood. Let them see tears. But most of all let them see us be men. #men #man #masculine #masculinity #pharmaceutical #adhd #add