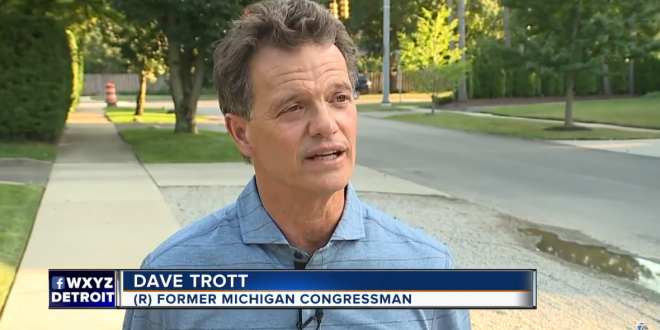 Dating at least as far back as the 2016 presidential campaign, Trump has been claiming to have won an award called “Michigan Man of the Year,” and he did so again at his rally in Manchester, New Hampshire this week.

CNN fact-checker extraordinaire Daniel Dale has been trying to figure out what the hell Trump is talking about, and this week, finally seems to have gotten to the bottom of it.

Former Michigan Republican Congressman Dave Trott — whom Trump can be seen thanking in that last clip — told Dale that there was no such award.

A video montage of the lies is at the link.

I have made progress on the Michigan Man investigation.

Former GOP congressman Dave Trott calls to say Trump claimed to him that he was given the award at a Lincoln Day dinner Trott invited him to speak at in 2013. But Trott says there was no award, just a speech.

Trott says that Trump thanked him for the alleged award at a 2017 roundtable with auto CEOs. Trott says he wasn’t about to correct Trump in front of CEOs while in Congress, but now he’s out of office and doesn’t care, so he can say Trump made it up.

Trott adds that the speech was well-received. He also adds that Trump insisted he had to tell the press that it was the largest Oakland County Lincoln Day Dinner crowd ever, even though Trott told him he had no idea if that was true. He says Trump claimed CBS said it was.