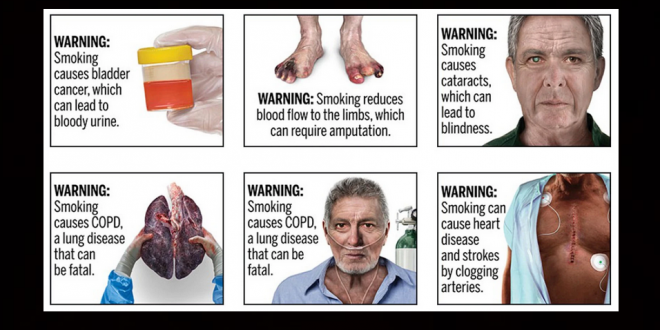 The corpse is gone. So are the grief-stricken woman, the rotting teeth and the man struggling to smoke despite a hole in his windpipe. Nine years after the Food and Drug Administration first proposed graphic images as warnings on cigarette packs but was thwarted by tobacco companies in a successful court battle, the agency announced on Thursday that it is finally issuing a new set.

Each of the 13 proposed warnings would cover the top half of a cigarette pack, to be used in rotation by manufacturers along with a variety of updated statements about the health risks of smoking. “When you look at the current warnings on the side of cigarette packs, they are virtually invisible,” said Mitchell Zeller, who runs the F.D.A.’s tobacco division. “The diseases embedded in these images will improve public understanding of the negative consequences of cigarette smoking.”

The FDA released graphic images of smoking-related illnesses, like amputated toes and bulging neck tumors, that tobacco companies would be required to use on packaging. RJ Reynolds is already mentioning 1st Amendment issues that defeated previous efforts. https://t.co/fJeODj8XeH

.@FDATobacco today proposed graphic health warnings for all cigarette packs and ads in the United States. The new warnings are strongly supported by scientific evidence and are a big improvement over the current text-only warnings. https://t.co/j6iCetisJu