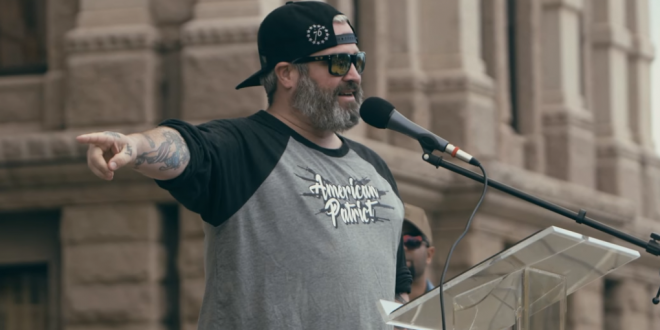 Extremists Claim Point Of Portland Rally Was To “Waste Millions In Police Resources,” Will Do It Again [VIDEO]

Several hundred were part of a right wing rally organized by former Infowars reporter and Florida radio host Joe Biggs [photo]. That group included the often violent Proud Boys, an “extremist conservative group,” according to the Anti Defamation League. Also present were members of the anti-government militia group the Three Percenters and the American Guard, “hardcore white supremacists,” according to the Anti Defamation League.

“I told you guys that I was going to throw you a curve ball,” right wing organizer Enrique Tarrio told his followers via loudspeaker just after they had assembled on Saturday. “It’s a pretty hefty curveball. Portland Mayor Ted Wheeler has wasted millions just to host people in this park. He’s wasted the time of police officers, so we’re going to waste his resources today. We’re going to barbecue, we’re going to hang out and we’re going to enjoy ourselves as we send our message.”

“The strategy there is to build it up and then come in and be the most peaceful thing that then just leave,” Biggs said. “We drained all these resources. And all they had to do was do their job and if they don’t do that, then guess what? We’ll come in and do it again next month. And then next month and next month.”

In videos promoting the rally before that interview, Biggs held a baseball bat with a Trump theme and was wearing a shirt that read: “Training to Throw Communists Out of Helicopters,” The Guardian reported. Biggs later pulled back on the rhetoric and asked his supporters to do the same after he was visited by the FBI.

Previous Trump Explodes At “Highly Unstable Nut Job” Mooch, Who Is A Mental Wreck And Probably Getting Divorced
Next Biden And Buttigieg To Skip DNC Delegates Meeting