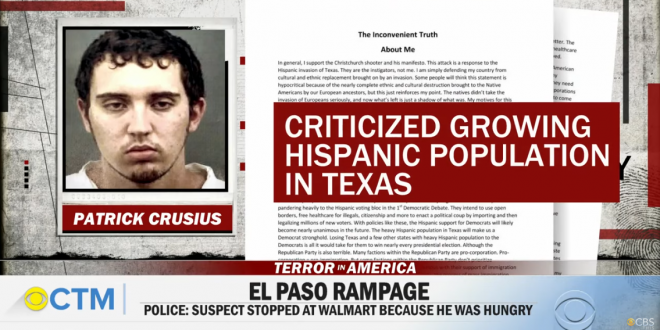 Many scholars of terrorism see worrying similarities between the rise of the Islamic State and that of white nationalist terrorism, seen most recently in the carnage in El Paso, Tex. “The parallels are stunning,” said Will McCants, a prominent expert in the field. And they are growing more notable with each new attack.

Experts say that the similarities are far from a coincidence. White nationalist terrorism is following a progression eerily similar to that of jihadism under the leadership of the Islamic State, in ways that do much to explain why the attacks have suddenly grown so frequent and deadly.

In both, there is the apocalyptic ideology that predicts — and promises to hasten — a civilizational conflict that will consume the world. There is theatrical, indiscriminate violence that will supposedly bring about this final battle, but often does little more than grant the killer a brief flash of empowerment and win attention for the cause.

Hit the link for much more. Gruesomely fascinating.

Previous Countries Warn Against Travel To “Violent, Racist” US
Next Fox & Friends Host: Mass Shootings Are What Happens When You Have Someone Who Doesn’t Fear The Lord