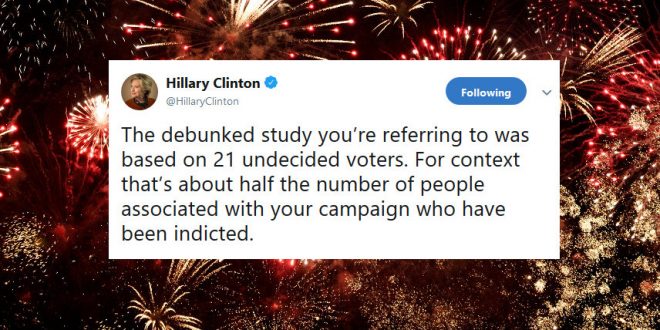 Shortly before noon, Fox Business aired a segment discussing testimony offered to the Senate last month. Robert Epstein, a psychologist who at one point was editor in chief of Psychology Today, told senators on July 17 that his research suggested Google had given millions of votes to Trump’s opponent Hillary Clinton in the 2016 election.

A guest on Fox Business named Oz Sultan, who worked with Trump’s 2016 campaign, looped that claim back into the broader, ongoing criticism of social-media companies that’s currently in vogue among conservatives. Trump, though, quickly picked out — and exaggerated — the claim about Clinton votes.

That’s not what Epstein said in his testimony. He estimated a range of 2.6 million to 10.4 million votes, with 15 million votes being the possible shift in 2020. That 2.6 million estimate, he said, was the “rock bottom” estimate. That’s a convenient figure, since Clinton won by about 2.9 million votes nationally.

The debunked study you’re referring to was based on 21 undecided voters. For context that’s about half the number of people associated with your campaign who have been indicted. https://t.co/0zHnWvGjSv

Previous Christian Prophet: “RBG Has Got To Be A Pedophile”
Next Twitter Says China Used Hundreds Of Fake Accounts To “Sow Political Discord” Against Hong Kong Protesters