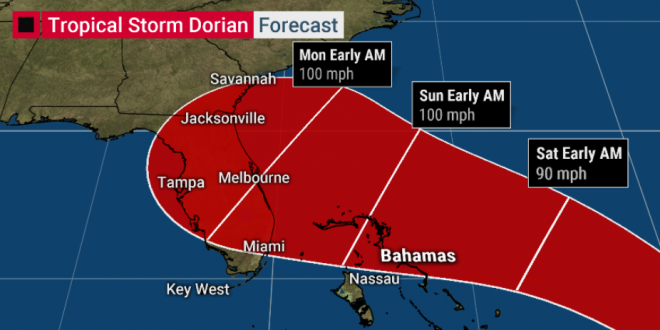 Tropical Storm Dorian strengthened overnight as Puerto Rico and the U.S. Virgin Islands were warned to brace for hurricane conditions with possible heavy rains and flash flooding today, the National Hurricane Center said in its 5 a.m. Wednesday update. The storm could hit Florida as a Category 2 hurricane by late Sunday or early Monday.

Overnight, winds picked up to 60 mph as the storm made its expected northwest turn, and a hurricane watch was issued for Vieques, Culebra, and the U.S. Virgin Islands. President Trump declared an emergency Tuesday night and ordered federal assistance for local authorities.

The center of the storm was around 240 miles east-southeast of Ponce, Puerto Rico, which is on the southern coast of the island, and was moving northwest at 13 mph early Wednesday, the National Hurricane Center said.

“For Puerto Rico and Dominican Republic, tomorrow morning, tomorrow evening, during the day — got to wrap things up when it comes to preparedness,” National Hurricane Center Ken Graham said in a video briefing earlier Tuesday.

Previous Boris Johnson Asks Queen To Suspend Parliament
Next TAKE THE LAND: Trump Tells Aides To Break The Law To Get Wall Built, Promises To Pardon Them If Convicted