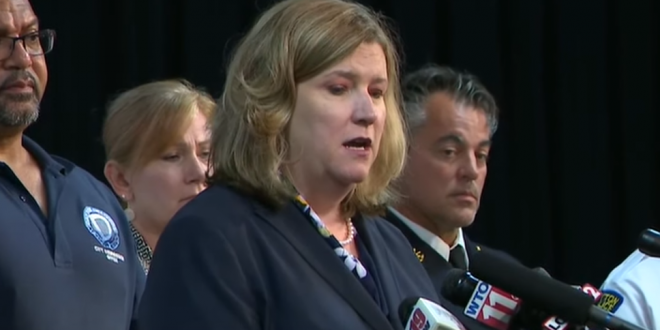 The deadly Oregon District shooting that left nine people and the shooter dead “is a day we all dread happening,” Mayor Nan Whaley said at a news conference. She began the news conference by passing along information that the shooter was wearing body armor, used a .223-caliber, high-capacity magazine and had additional magazines on his person.

Dayton police, on regular patrol in the Oregon District, shot and killed the gunman in less than a minute after the shooting began at 1 a.m.

“If the Dayton police had not gotten to the shooter in under a minute, hundreds of people in the Oregon District would be dead today,” she said. “This is the 250th mass shooting in America. It’s sad that it’s in the city of Dayton.”

I won’t post it here, but photos of the killer’s body have appeared on social media. The shooter, who has not been officially named at this writing, was wearing a The Acacia Strain hoodie, a Massachusetts-based band described as “deathcore” on Wikipedia. Below, The Acacia Strain frontman Vincent Bennett reacts to the news.

What happened in Dayton is horrifying. Even more so to know that the shooter was wearing a TAS hoodie is making me sick. There is no excuse for this. Anyone who knows anything knows we don’t condone this behavior. No one has the right to take another’s life.

We will be taking action to help the families of the victims however we can.