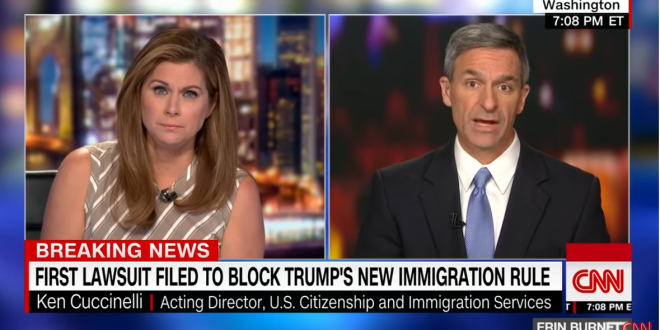 Cuccinelli: The Statue Of Liberty Refers To Europeans

Ken Cuccinelli, the acting head of U.S. Citizenship and Immigration Services, said on Tuesday that the poem inscribed on the Statue of Liberty welcoming immigrants to the United States was referring to “people coming from Europe.”

“Well of course that poem referred back to people coming from Europe where they had class-based societies,” Cuccinelli said of the inscription on the statue during an appearance on CNN on Tuesday. “Where people were considered wretched if they weren’t in the right class.”

“Give me your tired and your poor who can stand on their own two feet and who will not become a public charge,” he said Tuesday morning while responding to a question in an interview with NPR on whether Emma Lazarus’s poem, “The New Colossus,” was part of the American ethos.