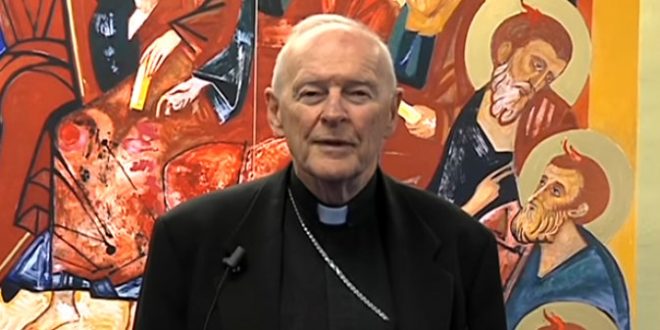 The handwritten missives, many signed simply “Uncle T.,” were sent to aspiring young priests as part of defrocked cardinal Theodore McCarrick’s perverse wooing of his victims, according to a pair of abuse prevention experts.

Several postcards and letters sent by McCarrick to his sexual targets were made public by The Associated Press, with experts saying the correspondence offers insights into the grooming process used by the creepy cleric as he pursued the young men.

McCarrick, now 89, flaunted his top-echelon position in the Catholic Church, referred to the young men as his “nephews” and even sent a thank-you note to a seminarian groped by the priest during a 1987 overnight stay in Manhattan.

“I just wanted to say thank you for coming on Friday evening. I really enjoyed our night. You’re a great kid and I know the Lord will continue to bless you. You are very much in my prayers,” McCarrick wrote in 1987 letter to a seminarian in his diocese after the former bishop had reportedly groped him.

“We have an almost full house, and by tomorrow the couches and maybe the floor will be taken — but we would have made room even for a big guy like you,” McCarrick wrote in another letter to the same seminarian.

“I’m sorry you weren’t able to come. It would have been good to have a visit with you. If you have some time in October during the break, some of the sems might be coming away for a couple of days fishing with me. Let me know if you’re interested,” McCarrick wrote in the undated letter, apparently written from one of the ex-bishop’s trips with his seminarians.

A man who grew up in North Jersey plans to file a lawsuit alleging that he was sexually abused as a child by former Cardinal Theodore McCarrick, his attorney announced Wednesday during a news conference.

Mitchell Garabedian, the attorney, also released the names of 28 New Jersey priests who allegedly abused 30 of his clients who are seeking settlements through a victim’s compensation fund set up by the state’s five Catholic dioceses.

The New Jersey Independent Victim Compensation Program began accepting applications in June and offers a way for victims of clergy abuse to settle their cases without going to court. As of Aug. 5, more than 50 victims filed claims and seven received cash settlements.

The AP is publishing correspondence McCarrick wrote to three men ahead of the promised release of the Vatican’s own report into who knew what and when about his efforts to bed would-be priests.https://t.co/Za3DKyzrg2