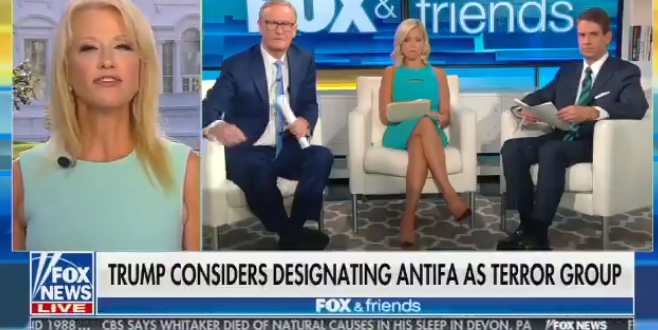 Kellyanne Conway on Monday incorrectly claimed that “antifa” is really a shortened version of “anti-First Amendment,” when in reality it is a moniker for anti-fascism protesters.

Conway’s claim, made while speaking from the White House on the final hour of Fox & Friends, echoed a Saturday tweet from Fox News contributor Dan Bongino, who wrote: “Everywhere the group ANTIFA (Anti-First Amendment) goes, violence and chaos follows.”

The senior White House counselor appeared to have knowledge of the tweet, as she was ready with the creative interpretation on Monday morning.

Previous Conway Mocks “Sesame Street” Recession Fear [VIDEO]
Next Christian Prophet: “RBG Has Got To Be A Pedophile”