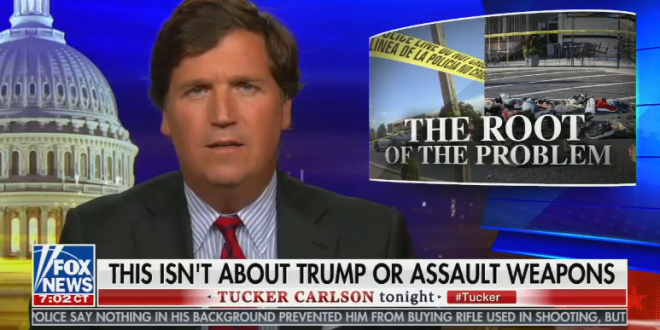 Carlson: Blaming Trump For Shootings Is A “Joke”

“So, 31 are dead tonight and the only thing that these people can think about is how to terrify Americans into voting for them. These are our so-called political leaders. They are disgusting. They’re also totally unimpressive, unequal to the task of fixing a society, that on some days like today for example, seems on the verge of collapse.

“Maybe that’s why they spend so much time trying to divert our attention from America’s actual problems. They don’t want to talk about what is really making us sick.

“They have no answers. They’ll tell you it’s about Trump or guns or white nationalism or Russia! It’s all a joke. These people are not serious, they’re children.” – Tucker Carlson, on last night’s show.