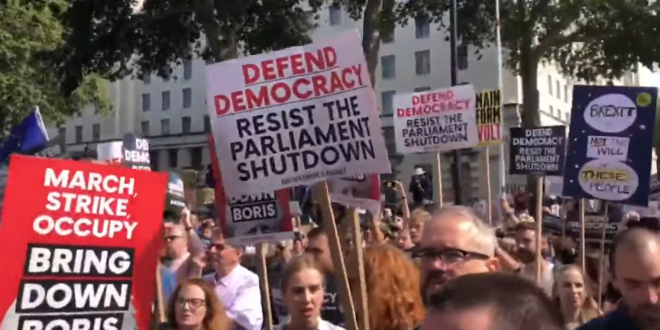 Tens of thousands of demonstrators are taking to the streets across Britain and outside the gates of Downing Street in protest against Boris Johnson’s move to suspend parliament.

Crowds brandished banners pledging to “defend democracy”, chanted “stop the coup” and waved EU flags in London in a bid to resist the parliament shutdown. Demonstrators are massing at protests in dozens of locations around the country including Manchester, Glasgow, Birmingham, Brighton, Swansea, Bristol and Liverpool.

In London, crowds chanted outside the gates of Downing Street and waved homemade placards. Laura Parker, Momentum’s national coordinator, told the crowd from a nearby stage: “This is our democracy and we will not let an unelected prime minister manage this power grab.

In London, Whitehall has been brought to a standstill, with demonstrators chanting “Boris Johnson, shame on you”. A small group of counter-protesters, marching in support of the prime minister, also arrived in Westminster.

Mr Johnson’s plan to prorogue Parliament prompted an angry backlash from MPs and opponents of a no-deal Brexit when he announced it on Wednesday. When Parliament is suspended, no debates and votes are held. This is different to “dissolving” Parliament – where all MPs give up their seats to campaign in a general election.

Shameful of Jeremy Corbyn to egg on hard-left Momentum scum and support their call to “occupy bridges and blockade roads” in protest of Brexit.

He’ll stop at nothing to install a hard-left government, sowing discord and whipping up hatred. Dangerous guy!

Huge crowds are gathering across major cities in the UK today to protest against Prime Minister Boris Johnson’s suspension of parliament before the #Brexit deadline. pic.twitter.com/uOKfwT1DrB

Thousands take part in protests across Scotland against Boris Johnson’s plans to suspend the UK parliament in the run up to Brexit. https://t.co/Yl1U4MKbD8 pic.twitter.com/vfBk0d08vI

Great crowd at the first #StopTheCoup protest in Liverpool. Boris suspending parliament is undemocratic & we must call on a general election! Regardless of what you voted for in the EU ref, this is our democracy, not allowing someone to undermine it and use their power to dictate pic.twitter.com/lQdFkaKPlr

The anti-Boris protest has come down to Deansgate to join Extinction Rebellion! pic.twitter.com/Ni32nedd7g

Proud to have spoken today on behalf of Labour at a protest against the proroguing of our Parliament by Boris Johnson and his far-right government.
Our democracy is fragile, it cannot be sidelined to allow a vicious no deal Brexit.

Need for civil disobedience has arrived

Hundreds of thousands of demonstrators are expected to take to the streets across the UK today to protest against Back Door Boris’ move to suspend parliament. Organisers are backing the use of civil disobedience. pic.twitter.com/EJlLdTJYXT

Protests on Whitehall against the proroguing of parliament by Boris Johnson. #DefendOurDemocracy Pics here https://t.co/H9JNXBgZL6 pic.twitter.com/yEF6EbrtV9

“He is totally undermining our democratic system.”

Michael Chessum, part of Momentum who have organised protests today against Boris Johnson’s decision to prorogue parliament, says it is vital that “a protest movement forms that can challenge the power of the govt.” pic.twitter.com/uL6maGvFfz

🎥 Crowds are gathering at George Square in #Glasgow as protests get underway across the country against the suspension of parliament.

Thousands of people are expected to take to the streets to protest against Boris Johnson’s actions this week. pic.twitter.com/nScpMgo9nF

Brighton #StopTheCoup protest. Where @lloyd_rm & @CarolineLucas are sharing their disgust at Boris Johnson’s attempts to silence the people. Great crowds being seen across the country. pic.twitter.com/jyUm5aRO6t

Clash between protesters in the Brexiteer and Remainer camps at Trafalgar Square in London. The protests come as Boris Johnson announced a parliament suspension after MPs return from their summer break, which will give them less time to debate the Brexit deal. pic.twitter.com/qMQ9Tb078v

Previous Trump Rages: I’m Not Suing My Former Assistant But I Am Suing That “Disgusting And Foul Mouthed” Omarosa
Next Screeching Fox News “Patriot” Tomi Lahren Roasted After Confessing Her “Freedom” Line Is Made In China