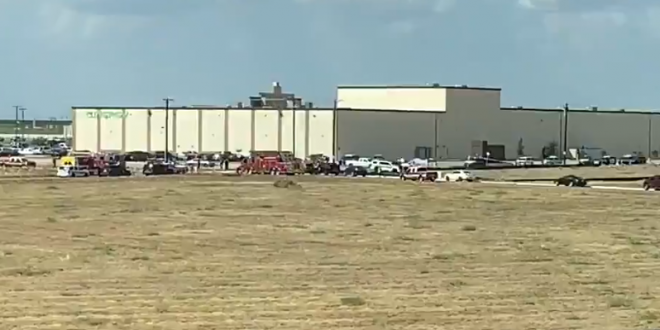 Law enforcement says there are multiple gunshot victims in an active shooter incident in west Texas.

Police say a suspect hijacked a U.S. mail carrier truck and is driving around Odessa shooting at random people. The suspect was last seen in the area of 38th and Walnut.

The Midland Police Department said in a Facebook post there may be two shooters in two separate vehicles. The University of Texas of the Permian Basin asked students to stay indoors.

At least 30 people have been shot in Odessa, Texas following an active shooter situation at a Home Depot store. The gunmen fled the scene in a gold-white toyota truck and a postal van, and are reportedly opening fire as they drive.

A police statement said: “We believe there are two shooters in two separate vehicles. One suspect is believed to be at the Cinergy in Midland and the other is believed to be driving on Loop 250 in Midland. The two vehicles in question are: gold/white small Toyota truck and a USPS Postal Van. Please stay away from these areas and stay indoors.”

Falcons: law enforcement in Midland and Odessa are working to locate and contain a shooter. Please stay in your dorm or office and do not open your doors. There were initial reports that the suspect was in east odessa. We will post here as soon as the situation is under control

There are 2 suspect on the loose in 2 separate vehicles.

DEVELOPING: A gunman is at large in a hijacked mail truck in Texas and “shooting at random people,” according to Odessa Police Department. There are “multiple gunshot victims,” police said. https://t.co/jdHsN3CCzA

Active shooter in #odessa about 4:10 heard multiple gunshots. This is the view at Cynergy in Odessa. Prayers for everyone please. Just shocked pic.twitter.com/dOzb0OkMbn

BREAKING: Police say that multiple people have been shot in the Odessa-Midland, Texas, area, by at least one shooter. People in the area are urged to stay indoors. pic.twitter.com/rOB9lzjqmI

Previous Notorious RBG: I Feel Great And I Love My Job [VIDEO]
Next CHATTER AWAY: Overnight Open Thread