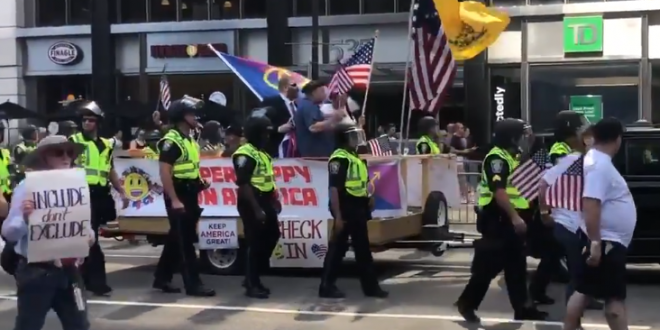 A so-called “Straight Pride Parade” in Boston on Saturday drew as many counterprotesters marches in addition to a heavy police presence.

The parade, which drew several dozen participants, kicked off at around noon to the sound of Lee Greenwood’s “God Bless the USA” with some floats displaying messages of support for President Donald Trump, with signs such as “build the wall,” “Trump nation” and “Blue Lives Matter.”

Since plans for the event were announced in early June, organizers have come under criticism. Some critics said that parade organizers are white supremacists whose intent was to bait members of the LGBT community in one of America’s most liberal cities.

Boston police donned riot gear in anticipation of potential violence, as the parade was expected to feature an appearance by conservative provocateur Milo Yiannopoulos, who was set to be the grand marshal and mascot for the parade.

The Proud Boys, a far-right group that often clashes with far-left antifa during demonstrations and gatherings, also made an appearance in Boston for the Saturday parade.

The organisers of a controversial “Straight Pride” rally are heavily linked with far-right movements and nationalist protests, it has emerged. Now questions have been raised over the past political activities of the trio of men behind the group, John Hugo, Mark Sahady and Chris Bartley.

Mr Sahady and Mr Bartley are both heavily associated with Resist Marxism – a loose ultra-conservative group found to have links to white supremacist organisations – while Mr Hugo ran, unsuccessfully, for congress in 2018 with an endorsement from the same group.

David here at the Boston Straight Pride Parade has been going on for the last 10 minutes ranting about how the Jews faked the holocaust, rule the world and created the LGBT movement to destroy America pic.twitter.com/awkkds7AAd

These two men traveled for 8 hours from Pennsylvania to Boston Straight Pride to represent the banned reddit subreddit /r/frenworld one is holding a pillow of Youtuber Sargon of Akkad pic.twitter.com/1i6HT8W8i1

One of the Boston Straight Pride Parade floats is a car with a piece of paper reading, Blue Lives Matter taped to it. pic.twitter.com/oZsaCCi8Ap

Steve Baldassari being interviewed by Blue Lives Matter News says he cane to the Boston Straight Pride Parade to remind people that this country is a Christian Nation and to help prevent gays from going to hell. He claims he can’t be a Nazi because his grandfather fought in WW2 pic.twitter.com/zqLCILqQxT

Boston Straight Pride is underway 100+ marchers and the sidewalk filled with protestors filled along the entire parade route. pic.twitter.com/pAym19Onok

David the holocaust denier from earlier is following Vermin Supreme to ask if he is a Jewish Supremacist Vermin is visibly confused by the question. pic.twitter.com/flIDgxotEe

Boston Straight Pride is selling blue and pink “straight shirts” for $25 each. pic.twitter.com/JryFv77rfi

Boston Straight Pride about to begin with less then 20 people in attendance. At least 3 teens who are marching mention being opposed to the parade and are coming as a joke. pic.twitter.com/P05ZVL8c7u

doing god’s work and taking advantage of the fact that my room looks out at the straight pride parade 🙂 pic.twitter.com/vjW2hQ9piu

Tourists say they thought the “Straight Pride Parade” in Boston was a Trump rally #WCVB pic.twitter.com/n3YdXjK9sG

Currently straight pride parade is being outnumbered 100 to around 15 by a group of elderly tourists on the other side of the park. pic.twitter.com/et1nXbBLez

The “Straight Pride” parade is happening in Boston now pic.twitter.com/Nn06T1HxF6

Shoutout to the people (presumably @EmersonCollege students) who did this outside the fascist Boston Straight pride parade route pic.twitter.com/S2jGRGPO8Q

I need y’all to see the turnout at Boston straight pride 😂🤦🏻‍♂️ pic.twitter.com/T5j1MNF3MJ

Since we all love crowd-size, as of 1:20pm – the folks up on the steps are Milo + #StraightPride‘s crowd…

…and the one after the pan to the right is OUR crowd 😎🤟 pic.twitter.com/6bLqUeHesW

The “Straight Pride” parade. The streets are absolutely quiet on the sidelines, with counter-protesters silently recording them. There’s been a lot of talk about not feeding trolls so this isn’t that surprising. pic.twitter.com/e9vJDNV5QU

Shameful Display by the @bostonpolice at #StraightPride

Charging into protestors who were protesting peacefully on the sidewalk, beating, arresting, and pepper spraying.

Make no mistake straight pride is hate pride and cops are here to protect and uphold white supremacy. pic.twitter.com/ey2Rc4uneA

Dystopian Scenes as the riot police are dispatched pic.twitter.com/j8SYb0cYFm

Previous Screeching Fox News “Patriot” Tomi Lahren Roasted After Confessing Her “Freedom” Line Is Made In China
Next Notorious RBG: I Feel Great And I Love My Job [VIDEO]