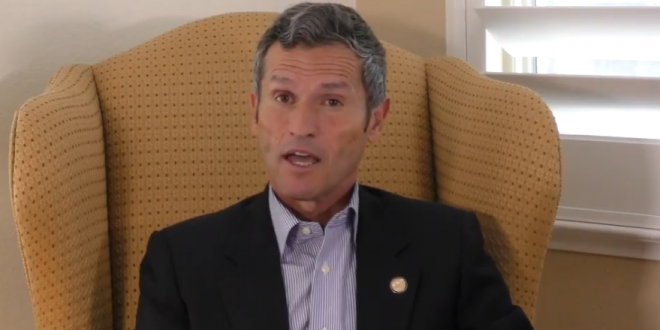 An anti-vaccine activist was cited for assault by the Sacramento Police Department on Wednesday after he livestreamed a physical confrontation with state Sen. Richard Pan, author of legislation to restrict vaccine exemptions.

Pan, a Democrat from Sacramento, was pushed from behind by Kenneth Austin Bennett [photo], who challenged the senator in the 2018 primary but did not qualify for the general election. Bennett filed a recall petition against Pan earlier this year alleging the senator was committing treason by authoring bills to increase vaccination rates in the state.

A video Bennett posted to Facebook shows he confronted Pan near the state Capitol and was livestreaming when he struck him. Afterward, Bennett said on the video that “I probably shouldn’t have done that.” The Sacramento Police Department said Bennett was cited for assault and released.

As you’ll see, there’s a lot of babbling about “the word of God” and “abominations” and Trump (of course!) before the assault happens. Oh, and chemtrails! From Bennett’s Facebook page: “Yes, I pushed Richard Pan for lying, laughing at us and for treason.”

Previous Los Angeles Set To Get Freeway Overpass For Wildlife
Next CHATTER AWAY: Overnight Open Thread