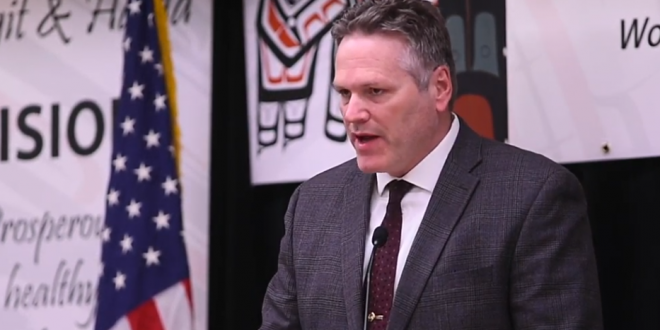 The Environmental Protection Agency told staff scientists that it was no longer opposing a controversial Alaska mining project that could devastate one of the world’s most valuable wild salmon fisheries just one day after President Trump met with Alaska’s governor, CNN has learned.

The EPA publicly announced the reversal July 30, but EPA staff sources tell CNN that they were informed of the decision a month earlier, during a hastily arranged video conference after Trump’s meeting with Gov. Mike Dunleavy. The governor, a supporter of the project, emerged from that meeting saying the president assured him that he’s “doing everything he can to work with us on our mining concerns.”

The news came as a “total shock” to some top EPA scientists who were planning to oppose the project on environmental grounds, according to sources. Those sources asked to remain anonymous for fear of retribution.

A related story from the Anchorage Daily News:

Organizers of the effort to remove Gov. Mike Dunleavy from office announced Thursday that one week after launching, they had gathered more than 18,000 signatures and were more than two-thirds toward completing a first-round signature drive.

“It’s fair to say that Alaska has never seen anything quite like this,” said Scott Kendall, attorney for Recall Dunleavy and previously chief of staff to former Gov. Bill Walker.

The recall effort gained a prominent supporter Wednesday when the board of a major Alaska Native regional corporation, Cook Inlet Region Inc., announced it was endorsing the campaign. The governor has said he does not think the effort will meet legal standards to appear on the ballot.