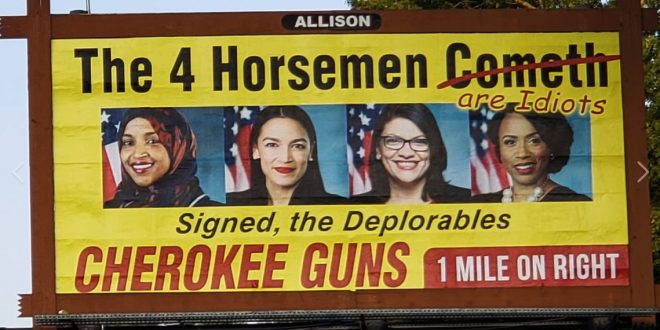 An advertising company has announced it will take down a billboard in Murphy, North Carolina, calling Reps. Ilhan Omar, Alexandria Ocasio-Cortez, Rashida Tlaib and Ayanna Pressley “idiots.” The billboard was promoting a local gun shop, and the shop’s owner said he wants to go to court to keep it up.

The billboard received national attention after Cherokee Guns posted a picture of it on Facebook. Cherokee Guns stood by its ad and even sold bumper stickers of it for those who wanted to show support.

Allison Outdoor Advertising wrote on Facebook about its decision to take down the billboard, according to WTVC-TV. However, that post has been removed.