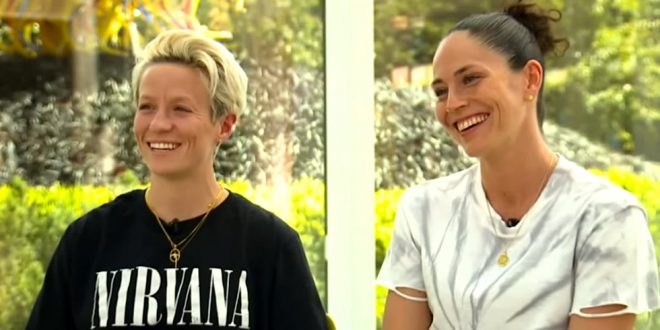 What’s it like to have the literal President of the literal United States (of literal America) go Full Adolescent Boy on your girlfriend? Hmm. Well… it’s WEIRD. And I’d say I actually had a pretty standard reaction to it: which was to freak out a little.

That’s one thing that you kind of have to know about me and Megan: our politics are similar — after we won the WNBA title in Seattle last season, no way were we going to the (f*cking) White House! — but our dispositions are not. And as we’ve been talking through a lot of this “stuff,” as it’s been happening to her, you know, I’ll be honest here….. some of it scares the sh*t out of me!!

I mean, some of it is kind of funny….. but like in a REALLY? REALLY? THIS GUY??? kind of way. Like, dude — there’s nothing better demanding your attention?? It would be ridiculous to the point of laughter, if it wasn’t so gross.

You’ll likely find the full piece entertaining. The US team faces England in the World Cup semifinal this afternoon.

So the President F*cking Hates My Girlfriend | By ⁦@S10Bird⁩ https://t.co/sMfEn2ZlJI