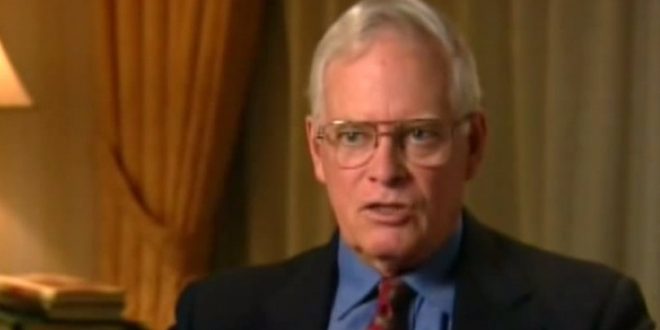 Dr. John Tanton, an ophthalmologist in Michigan who became an anti-immigrant leader criticized by civil rights advocates as being racist but praised by his supporters, died in Petoskey on Tuesday. He was 85.

Tanton established several groups calling for reduced immigration and his ideas have had a significant influence on the immigration debate, helping drive some of the immigration policies under President Donald Trump. He was described by the Southern Poverty Law Center as the racist architect of the modern anti-immigrant movement.

The president of a group he founded that calls for sharp reductions in immigration, Federation for American Immigration Reform (FAIR), said in a statement, “this remarkable giant of a man … passed Tuesday quietly in his home town of Petoskey, Michigan.”

Tanton spent decades at the heart of the white nationalist movement. His racist views were first exposed in 1988 when a series of private memos he wrote for principals at the Federation for American Immigration Reform (FAIR) were leaked to the press. The memos were filled with racist statements and warned about a coming “Latin onslaught.”

At the time, Tanton’s group U.S. English, which opposed bilingualism in public schools and government agencies, disavowed any racial motivation. “Hispanics who learn English will be able to avail themselves of opportunities,” explained its president, former Reagan administration official Linda Chavez. She resigned when Tanton’s memos were leaked.

Tanton’s group FAIR, whose members have testified frequently before Congress, accepted more than $1 million from the Pioneer Fund, a racist foundation devoted to proving a connection between race and intelligence. FAIR has hired as key officials men who were also active in white supremacist groups and has others who write for anti-immigrant hate sites.

John Tanton, the architect of the modern anti-immigrant movement who founded so many SPLC-designated hate groups, has died.

He was eulogized on white nationalist Jared Taylor’s podcast today. /1

I imagine seeing a sitting US president awash in lusty cheers of “Send Her Back” about a Somali-refugee-turned-congresswoman may have caused his mean old heart to beat just a little too fast.

I won’t mourn his passing. He’s created a world of pain and suffering for so many. /2

ALERT: Dr. John Tanton of Michigan, described as the racist architect of the modern anti-immigrant movement, died Tuesday at the age of 85 in Petoskey, according to the president of the group he founded, FAIR, which advocates for fewer immigrants.
1989 Detroit Free Press photo: pic.twitter.com/YGQA0dYKu9