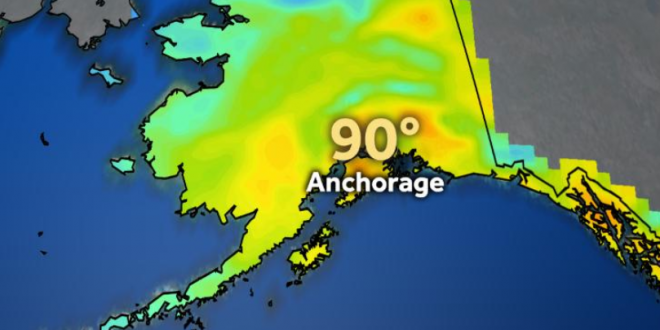 Anchorage, Alaska, saw sizzling temperatures on Thursday, hitting 90ºF degrees and toppling the city’s all-time record-high temperature by 5 degrees, as well as the daily record of 77ºF for July 4, according to Weather.com.

Why it matters: The Arctic region has pushed into an entirely new climate. The last 6 years have been the warmest Alaska has experienced since record keeping began in 1952.

In addition, Alaska’s land-based ice is being lost at a rate of about 14,000 tonnes per second, according to William Colgan, co-author of a report on Arctic climate change in the journal Environmental Research Letters.

In more than 100 years of Anchorage history, weather stations have never recorded a single 90-degree reading. If current forecasts hold, it could happen multiple times in the coming days. https://t.co/6XfkVEB2lO

Anchorage, Alaska (88 F) is currently warmer than Miami, Florida (85 F). Heat to continue across much of Alaska into next week: https://t.co/Xj2jTk2Vaj pic.twitter.com/r0hprQpzJL