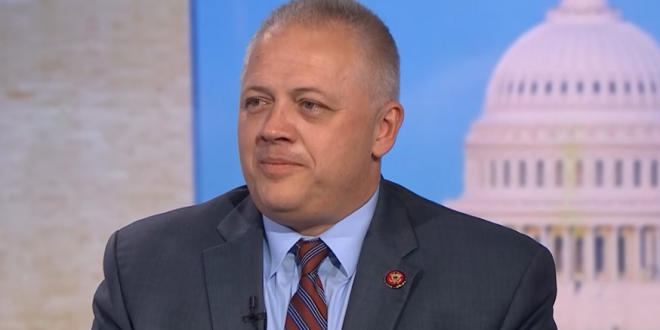 VIRGINIA: Republicans Fail In Attempt To Censure US House Rep For Having Officiated Same-Sex Wedding

A small number of Republicans on a congressional district committee tried to censure Rep. Denver Riggleman because he officiated a same-sex marriage earlier this month. The 5th Congressional District Republican Committee went into a closed session for more than two hours to discuss the matter at a meeting on Saturday at Healing Strides horse riding center near Boones Mill.

More than two dozen committee members attended. Wendell Johnson, who represents Bedford County on the committee, tried to introduce a motion in open session to officially reprimand the first-term congressman, a Republican from Afton. “I move that the committee censure Denver Riggleman for failing to uphold the Republican Party platform in that it states ‘marriage is between one man and one woman,’” the motion read.

After the censure vote failed, the committee’s chairman posted this on their website:

As you’ll see at the link immediately above, the post goes on to entirely reproduce all of the viciously anti-LGBT elements of the GOP’s 2016 platform.

Riggleman won his first term last year by a six points after the GOP incumbent did not seek reelection.