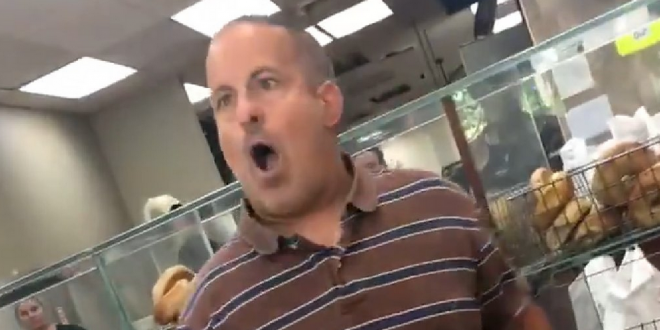 A Long Island bagel shop customer was caught on camera lashing out at other patrons in a bizarre tirade about women rejecting him because of his short stature. “Why is it OK for women to say, ‘Oh you’re 5 feet’ on dating sites — you should be dead. That’s OK?” the unidentified Bagel Boss customer roared in a video shared to Twitter on Wednesday.

The 45-second clip showed the vertically challenged customer at the Bay Shore location lash out at a female customer Wednesday morning before he was tackled by another, much larger man in the store. “Everywhere I go I get the same f–king smirk with the biting lip,” he shouted.

The bizarre Bay Shore, New York exchange was posted to social media Wednesday from a Long Island Bagel Boss location by Diana Reyes and a second woman identifying herself on Twitter as Olivia Shea Bradley.

The increasingly volatile situation escalated into a physical altercation after the self-described “short,” single man railed against women being critical of his stature. He then challenged at least two other male bystanders to attack him — an offer that one man promptly accepted.

According to an Instagram live video later posted by the two women, the incident began after the man was mumbling derogatory comments to himself and was being “rude” to the female bagel shop employees. It is unclear why he connected women demeaning his diminutive stature to his Wednesday bagel purchase.

“I’m the one who started a fight with a misogynist,” Bradley said in the Instagram video. “Nobody was saying anything, because he was very clearly just being rude and saying awful things to these women who were working behind the counter. And no one was saying anything.”

She said she told him, “stop, they’re just trying to do their jobs, get over it, leave them alone.”

Reyes said she started recording because she was scared for her friend as the man got closer to her face. “My first reaction was to just start recording,” Reyes said, “Because God forbid he put his hands on her or anyone for that matter, I’d have it on video. It just escalated.”

so in bagel boss this morning, the misogynistic douchebag seen in the video was degrading almost all of the female staff as well as other patrons. fuck this guy. pic.twitter.com/LZh1Uk4UXZ

If you guys wanted to know what happen next, here ya go pic.twitter.com/jOHzispksW

A MESSAGE FROM BAGEL BOSS: After todays incident everyone is ok! Use caution on dating sites and anyone who comes into our locations and mentions this video can get a FREE MINI BAGEL!!!!!!!! https://t.co/Pvi9jXxI6t

History in the making at Bagel Boss pic.twitter.com/IshRtdFttE