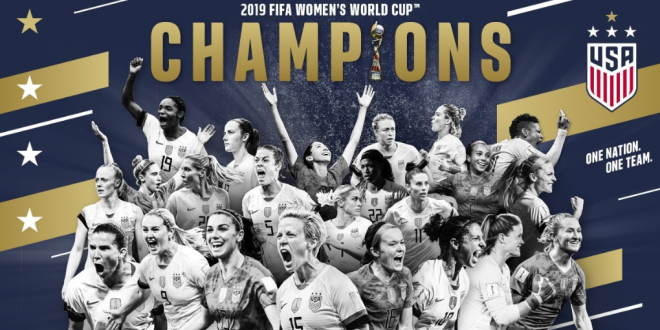 US Wins World Cup In 2-0 Victory Over Netherlands

The United States was denied for a half. But in the end, there was no stopping the Americans. The United States women’s soccer team claimed its fourth straight Women’s World Cup title on Sunday, beating a valiant Netherlands team. 2-0, in Lyon, France, to repeat as world champions.

Megan Rapinoe and Rose Lavelle scored second-half goals for the United States, who needed more than an hour to solve a tenacious defensive effort by the Netherlands. Rapinoe broke the dam with a penalty kick in the 61st minute, and Lavelle sealed the victory with a driving run up the center in the 69th.

It was the second straight World Cup title for a dozen of the American players, who claimed their first in Canada four years ago. It also cemented their status as the gold standard in women’s soccer, even as Europe — led by teams like the Netherlands — mounts a sustained assault on their crown.

Rose Lavelle scores the 2nd goal for the US! 2-0 🇺🇸 pic.twitter.com/IYatK1tKMv

Megan Rapinoe scores her 50th international goal from the penalty spot and gives USA the lead in the #FIFAWWC final! pic.twitter.com/gjPpYOrcyl

AND THE CROWD GOES WILD!!!!!! USA 🇺🇸 Women’s #Soccer ⚽️ teammate & NorCal native Megan #Rapinoe scores the first #goal of the #WomensWorldCup final in a penalty kick against the Netherlands 🇳🇱!! See the pandemonium break out at @AOSacramento’s watch party at Costanza’s!@ABC10 pic.twitter.com/UOoLwrpkJx

GOAL! Megan Rapinoe scores off a penalty kick in the ‘61 – @USWNT leads 1-0 – City Hall Plaza is getting LOUD! @wbznewsradio pic.twitter.com/yx9O306VOU

WE HAVE A GOAL.

Woo-hoo! Congratulations to the @USWNT on their World Cup win. Your persistence on and off the field inspires girls and women everywhere to dream big, fight hard, and win. #FIFAWWC #OneNationOneTeam

Congratulations, ladies! You make us so proud, on and off the field.

Once again the @USWNT has proven they’re the best team in the world—now let’s make sure they’re paid like it. #onenationoneteam

To our 2019 World Cup Champion @USWNT: you have inspired the entire country — and New York City knows how to celebrate champions. We’ll see you Wednesday at 9:30 AM for the Ticker Tape Parade down the Canyon of Heroes. #OneNationOneTeam pic.twitter.com/bwCEoJYg3r