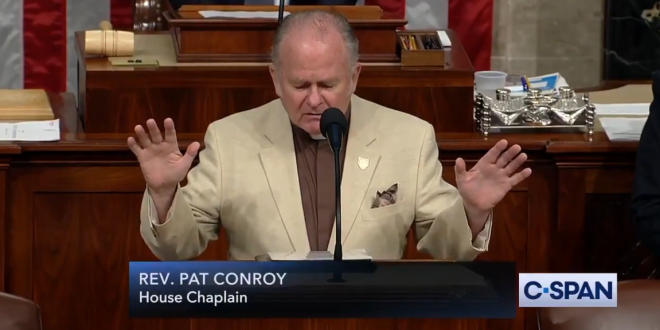 So this totally happened this morning:

After several chaotic and historic days on Capitol Hill, the chaplain of the House of Representatives opened the legislative day Thursday with a prayer to cast out “all spirits of darkness from this chamber.”

“This has been a difficult and contentious week in which darker spirits seem to have been at play in the people’s House,” the Reverend Pat Conroy began.

Then, in a dramatic moment, Conroy raised both hands and said, “In Your most holy name, I cast out all spirits of darkness from this chamber. Spirits not from You. I cast out the spirit of discouragement which deadens the hope of those who are of goodwill.”

Earlier this year Conroy won his lawsuit to block secular invocations from the US House. He first appeared on JMG last year when he offered his resignation because Paul Ryan had attacked him for praying against GOP tax cuts.

Previous Rush Limbaugh: Chants Of “Send Her Back” Are Totally Understandable Because Our Country Is Being Stolen
Next SURVEY: Mitch McConnell Is Most Disliked Senator