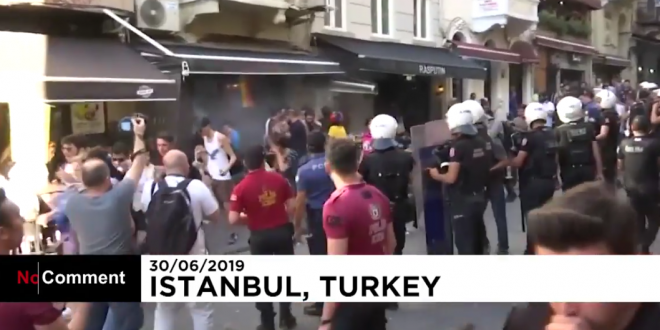 Police pushed back crowds celebrating Istanbul’s 17th gay pride march on Sunday, an event Turkish authorities had banned for the fifth year in a row.

The rally, on a side street off Istanbul’s main pedestrian avenue, drew several hundred people who cheered and waved rainbow flags. Chants of “shoulder to shoulder against fascism” and “we will not be quiet” were heard among the crowd.

“There is a massive police presence all around the city to prevent the celebration of Pride, but despite that, activities are still going on,” DW’s Turkey correspondent Dorian Jones reported, noting also that riot police officers were backed up with water cannon.

Police with dogs allowed rally leaders to make a short statement to the media before officers dispersed the crowd with tear gas, blocking the street. Istanbul Pride organisers said they would continue to fight to get sexual orientation and gender identity recognised in Turkish laws.

Amnesty International said the authorities had rejected all suggested locations for the rally by deeming the LGBT+ community “societally objectionable”. In 2014, up to 100,000 people attended a Pride march in Istanbul, but police have tried to block the events since.

Police have reportedly started using teargas & plastic bullets against hundreds who had gathered for #istanbulPride. Footage taken by @aforgutu an before the violence. #Pride #pride2019 #HerYürüyüşümüzOnurYürüyüşü pic.twitter.com/4aQJeXkAst

Such courage. Fifth year in a row @NATO ally #Erdogan‘s forces have tried to stop #IstanbulPride.

They marched, peacefully, despite the teargas.#Istanbul#Pride#Pride2019https://t.co/5Q6Ua0Gs9z