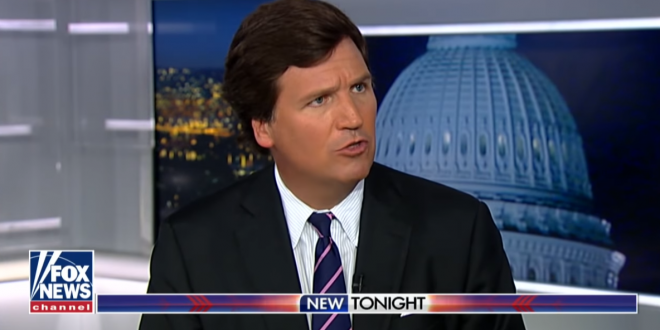 Fox News host Tucker Carlson said on Sunday that part of “what it means to lead a country” is “killing people.” Carlson made the comment while speaking to Fox & Friends from South Korea, after witnessing President Trump become the first sitting president to walk into North Korean territory.

The conservative commentator went on to say that while he “is not a relativist or anything,” it is the “nature and life, and certainly the nature of power” to have to choose between “the bad people and the worse people.”

“I do think that’s how the president sees it,” Carlson said. “He’s far less sentimental about this stuff.” The president has previously touted his “love” for the dictator, saying they get along well and have “good chemistry.”

Tucker Carlson justifies KJU’s murderous regime: “You’ve got to be honest about what it means to lead a country, it means killing people. A lot of countries commit atrocities, including our allies.”

Carlson adds, ‘it’s silly and stupid to point out KJU is ‘so mean” pic.twitter.com/FpAKFQUB3c