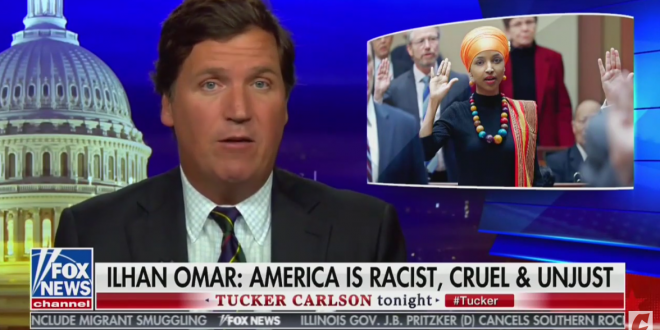 Fox News host Tucker Carlson ended his show on Tuesday with an attack on Rep. Ilhan Omar (D-Minn.), claiming that she hates America and is “living proof that the way we practice immigration has become dangerous to this country.”

“Ilhan Omar has an awful lot to be grateful for, but she isn’t grateful, not at all. After everything America has done for Omar and for her family, she hates this country more than ever,” said Carlson, before launching into vicious rhetoric.

“Virtually every public statement she makes accuses Americans of bigotry and racism,” he said. “This is an immoral country, she says. She has undisguised contempt for the United States and for its people. That should worry you, and not just because Omar is now a sitting member of Congress.”

“After everything that America has done for Omar, and for her family, she hates this country more than ever,” Carlson claimed.

He cited a recent profile of Omar in the Washington Post that described her view of the United States as a country that has “failed to live up to its founding ideals, a place that had disappointed her and so many immigrants, refugees and minorities like her.”

This is a common critique leveled by progressives like Omar — of an America that has let down many of its citizens. Carlson dismissed it and dug into Omar.

Not gonna lie, it’s kinda fun watching a racist fool like this weeping about my presence in Congress 🤣🤣

No lies will stamp out my love for this country or my resolve to make our union more perfect.

They will just have to get used to calling me Congresswoman! https://t.co/nRS13yWivK

Even for Tucker Carlson, this is outrageously racist.

Advertisers need to wake up.

By financially supporting this show and the people who rubber stamp these messages, you are sponsoring white supremacy. Full stop. https://t.co/I3Q9BYcPYo

As you watch this brazenly racist attack on @IlhanMN by Tucker Carlson, remember that @StarKistCharlie advertises on this show almost every night pic.twitter.com/mu0wCz2YFa

To all the conservatives I’ve argued with about Tucker Carlson: I told you so.

Previous British Ambassador To US Resigns After Trump Attacks
Next Rapinoe To Trump: You’re Excluding People Like Me