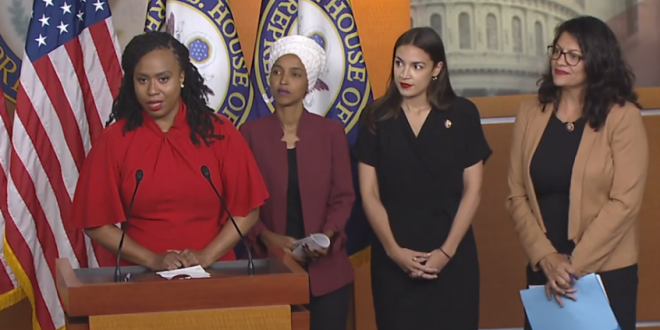 Let’s go to Fox News for this one:

In spirited remarks tinged with open animosity, Rep. Ilhan Omar, D-Minn., standing side-by-side with Reps. Alexandria Ocasio-Cortez, Ayanna Pressley, and Rashida Tlaib, declared at a news conference on Capitol Hill Monday that “it is time for us to impeach this president” for “openly violating” his constitutional oath.

“The eyes of history are watching us” in this “pivotal moment,” Omar said. Pressley, in her remarks, repeatedly referred to Trump as “the occupant of the White House” seeking to “marginalize and silence” the women, but quickly turned her focus to various issues, from gun violence to immigration.

Tlaib, speaking separately, backed Omar’s call for impeachment, saying Trump’s language was “disgusting and bigoted” and that his administration was “lawless.”

“Our Squad is Big.” @AyannaPressley YESS!

The Obama Administration built the Cages, not the Trump Administration! DEMOCRATS MUST GIVE US THE VOTES TO CHANGE BAD IMMIGRATION LAWS.

We will never be a Socialist or Communist Country. IF YOU ARE NOT HAPPY HERE, YOU CAN LEAVE! It is your choice, and your choice alone. This is about love for America. Certain people HATE our Country….

….They are anti-Israel, pro Al-Qaeda, and comment on the 9/11 attack, “some people did something.” Radical Left Democrats want Open Borders, which means drugs, crime, human trafficking, and much more….

….Detention facilities are not Concentration Camps! America has never been stronger than it is now – rebuilt Military, highest Stock Market EVER, lowest unemployment and more people working than ever before. Keep America Great!

The Dems were trying to distance themselves from the four “progressives,” but now they are forced to embrace them. That means they are endorsing Socialism, hate of Israel and the USA! Not good for the Democrats!