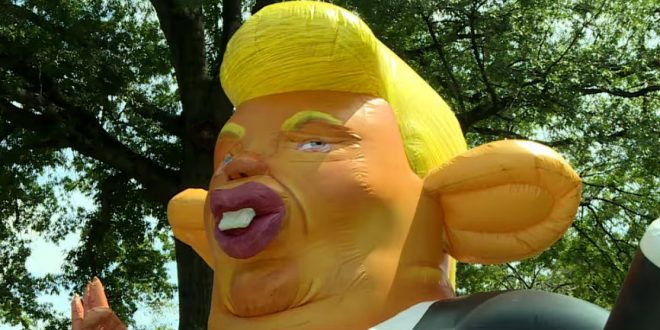 President Donald Trump continued to use his Twitter platform Sunday to defend himself after he drew fire from critics for angry comments previously tweeted about Maryland Congressman Elijah Cummings and the city of Baltimore.

The president’s insistence on insulting the metropolis ultimately resulted in the hashtag #TrumpIsARat trending on social media.

Trump’s comments on Baltimore appeared to be prompted by an early morning segment aired on Fox News’ Fox & Friends where and Fox News commentator Kimberly Klacik discussed the state of the city while the network aired videos she had taken of trash piled up in some Baltimore neighborhoods.

Another day and more racist comments by Trump. And keep in mind Trump is supported by 90% of the GOP. #TrumpIsARat

donald might as well have a ring in his nose bc he’s being led around by Fox and that’s pretty evident. #TrumpIsARat

Something is wrong when you cuddle up to murderers like Kim Jong-Un, MBS, and Vladimir Putin, but you go on a 2-day racist rant against an AMERICAN like Rep. Elijah Cummings.

Donald Trump came down harder on Elijah Cummings for being a patriot than he did on Saudi crown prince Mohammad bin Salman for slaughtering Jamal Khashoggi. #TrumpIsARat

Obama = still loved and respected all over the world

Trump = greeted with a diaper balloon wherever he goes#TrumpIsARat

Many people are saying that trump shouldn’t be throwing stones in his glass house attack on Baltimore.

But, to be fair, how ELSE can he get rid of all the rats, roaches, and flies in his OWN trump tower restaurants? #TrumpIsARat#SundayMorning https://t.co/3LrSs3QX4I

#TrumpIsARat
That’s why his restaurants are full of rats… he must love kindred spirits.https://t.co/oPK6QKG77H
The others in his White House are rats too.
Would someone please call pest control? pic.twitter.com/rNvPSWM2uc