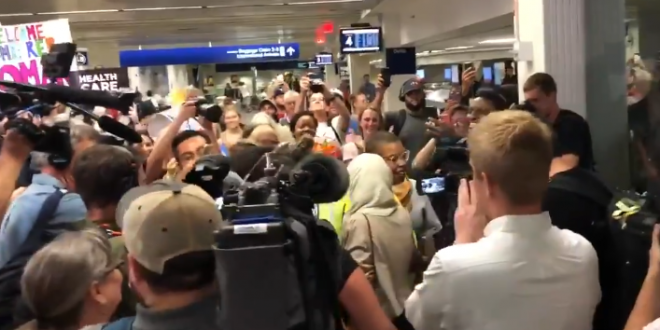 He once encouraged supporters to attack protesters — then claimed to ensure the safety of all Americans. He mused that Russia should seize his competitor’s emails — then said it was just a joke. And he whipped his crowd into a frenzy about locking up Hillary Clinton — before insisting post-inauguration that the idea of prosecuting his Democratic opponent is “just not something I feel very strongly about.”

President Donald Trump returned to a familiar tactic Thursday of blaming others for a problem many believe he created, tossing his own base under the bus to deflect outrage from GOP allies on Capitol Hill and beyond. It’s a throwback to a field-tested Trump playbook: push the rhetoric further than some allies can handle, then tiptoe back to shrug off responsibility.

It is amazing how the Fake News Media became “crazed” over the chant “send her back” by a packed Arena (a record) crowd in the Great State of North Carolina, but is totally calm & accepting of the most vile and disgusting statements made by the three Radical Left Congresswomen…

….Mainstream Media, which has lost all credibility, has either officially or unofficially become a part of the Radical Left Democrat Party. It is a sick partnership, so pathetic to watch! They even covered a tiny staged crowd as they greeted Foul Mouthed Omar in Minnesota, a…

….State which I will win in #2020 because they can’t stand her and her hatred of our Country, and they appreciate all that I have done for them (opening up mining and MUCH more) which has led to the best employment & economic year in Minnesota’s long and beautiful history!

Congresswoman Omar just arrived back in the Twin Cities. pic.twitter.com/ZiFqWnDJgQ