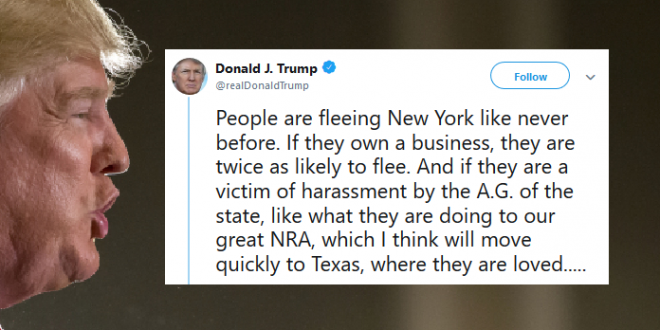 Trump Wails: People Are “Fleeing New York” Because Dems: First They Tax You Too High, Then They Sue You

President Donald Trump started off the day with another Twitter rant against the state of New York and its investigations of his family business. The president ranted Monday and again today against the state and its Democratic governor, Andrew Cuomo, and attorney general, Latitia James, for investigating the Trump Organization and Trump Foundation, which was forced to shut down over financial improprieties. It’s not clear what has prompted the president’s recent attacks on his home state.

People are fleeing New York like never before. If they own a business, they are twice as likely to flee. And if they are a victim of harassment by the A.G. of the state, like what they are doing to our great NRA, which I think will move quickly to Texas, where they are loved…..

…Texas will defend them & indemnify them against political harassment by New York State and Governor Cuomo. So many people are leaving New York for Texas and Florida that it is totally under siege. First New York taxes you too high, then they sue you, just to complete the job

As most people are aware, according to the Polls, I won EVERY debate, including the three with Crooked Hillary Clinton, despite the fact that in the first debate, they modulated the sound on me, and got caught. This crew looks somewhat easier than Crooked, but you never know?