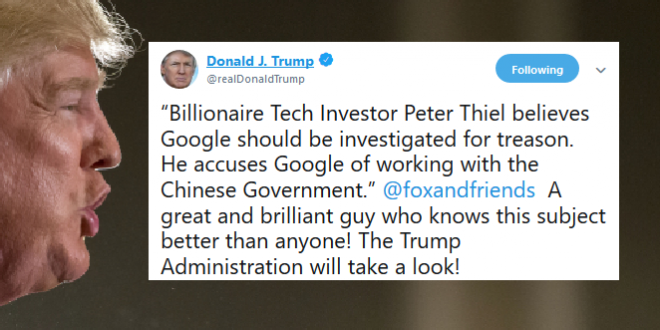 Peter Thiel, billionaire investor and Facebook board member, on Sunday night said that Google should be federally investigated for allegedly aiding the Chinese military. Thiel is the tech industry’s highest-profile Trump supporter, and one of the most powerful players in Silicon Valley.

Thiel spoke at the National Conservatism Conference, a new event that bills itself as being focused on Trump-era nationalism. According to other attendees at the conference on Sunday, Thiel also said that Americans were too fat and addicted to drugs, adding that, “the biggest problem in our society is the problem of political correctness.”

“Billionaire Tech Investor Peter Thiel believes Google should be investigated for treason. He accuses Google of working with the Chinese Government.” @foxandfriends A great and brilliant guy who knows this subject better than anyone! The Trump Administration will take a look!

Previous Ingraham: Trump Made An “Unforced Error” But He’d Tell You Got Go Back To Sweden If You Hate America
Next Ben Shapiro: If A Woman Plays James Bond Then Male Viewers Can’t Fantasize They’re Him While Watching